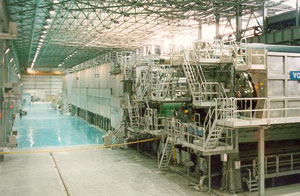 Manufacturing of newsprint, printing and writing papers from Bagasse remaining from Suger manufacturing.

The mill is location in a town called “ Kous ” which is a subordinate to governorate in upper Egypt called “ QUENA ” on an area of 110 fedan, adjacent to “ KOUS Sugar mill ” which save the raw material of Bagasse. .

120,000 tons per year of newsprint , printing and writing papers.

Total investment costs of the project:-

1000 laborers at an annual wage of 85 million Egyptian pounds.